IGG Software have announced that they are officially ceasing the development of iBiz, their time tracking and billing application.

Last month many iBiz users asked us whether they can use their iBiz data with Fanurio, so we've decided to implement a tool that converts an iBiz (4.1.4) database to a Fanurio (3.0) backup file.

If you are new to Fanurio, see the features page for a quick introduction.

This post is no longer up to date. The import tool announced initially here is now part of Fanurio. See this guide to learn how to migrate from iBiz to Fanurio and how Fanurio is different from iBiz.

Scroll down to read several testimonials from users who have migrated from iBiz to Fanurio.

Because version 3.1-beta4 can handle deposits, the import tool can now import unallocated payments as well.

Since we first announced the iBiz import tool in January, we received a lot of feedback and part of that feedback has already been implemented in the last three beta versions (3.1-beta1, 3.1-beta2, 3.1-beta3). I think this proves that we are committed to helping anyone who is looking for an iBiz alternative. 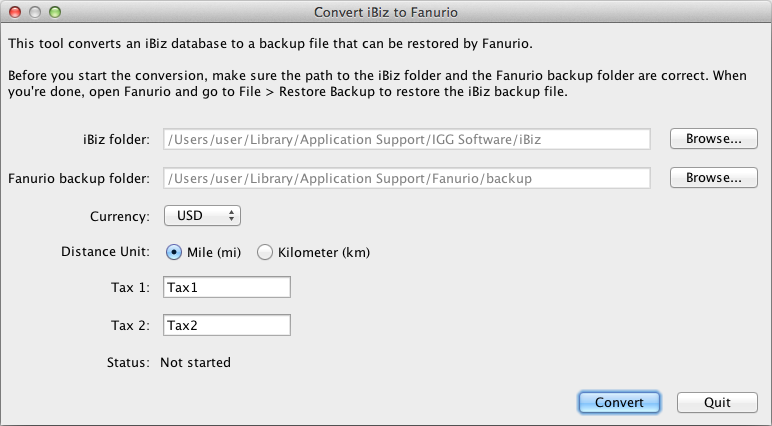 The tool asks you to specify the currency used by iBiz (Fanurio can handle multiple currencies) and the default distance unit (Fanurio can record both miles and kilometers). You also need to enter the names of your taxes.

The tool imports the following objects:

The tool doesn't import the following objects yet:

The import tool is currently available upon request. If you are interested in replacing iBiz with Fanurio, please let us know and we will help you make the transition.

If you are still pondering whether to replace iBiz with Fanurio, here are several testimonials from people who have tried it.

I was sold on the simplicity of transferring my iBiz data into a Fanurio repository and how straightforward it's been to adapt to using Fanurio. But the stellar customer support, specifically from Nicu (bless you!), is the inestimable value added to your product. Thanks again for your kindness and a truly useful application.

Excellent migration experience from my iBiz instance thanks to top-quality customer service. Many thanks.

You helped me through setting up to use Fanurio last month (Nov 2014). I have just completed my first full invoice for a project undertaken in Nov. I have to say it has been the fastest, most pain-free experience I have ever had with a self accountancy package. From beginning to end it took me approximately 15 mins - at least a quarter of the time it used to take me using iBiz. So once again, many congratulations on a fantastic app and thank you once again.

I am a long time user of iBiz. I switched to Fanurio and Nicu helped me transfer my data :) No affiliation with the company but the price was right and it works well for me.

Elaine on the IGG Developers' Blog

I am not affiliated with Fanurio, but took the time yesterday to demo it and import all iBiz data. The support they provided to help me to aid in seamlessly migrating iBiz data into Fanurio was outstanding.. and I'm not yet a paying customer. All essential data (client, project, invoicing and payments) has been retained and I can make a clean break from iBiz. Other options meant keeping iBiz around on an old machine for a few years.

Andrew on the IGG Developers' Blog

I have been very impressed with the support Nico has offered while testing out fanurio. He has been very helpful in transferring the data and customizing some things for me. And he responds by email within 24 hours.

This is a really solid, well supported product. Give it a try. good luck fellow iBizians.

oahuken on the IGG Knowledge Base

Thanks to everyone for your suggestions earlier.

I have discovered a single user application called Fanurio and have been testing out their latest Beta (3.1 beta2) for about a week. The application is quite impressive, and very customizable, but the real standout here is the customer service. I don't think I've encountered such a genuine desire to help from someone I've never met since the early '90s, when we were all a happier bunch.

The company has also stepped up to help those of us that came to depend on iBiz and got left in a lurch when they ceased development at the release of Mavericks. They've even provided an AppleScript to import most of the data from iBiz, and I got immediate assistance from Support with some things that needed more attention.

The functionality of the Invoicing Template Editor proved to be too much for me when trying to convert my iBiz templates so Nicu (I don't think this guy sleeps) took my .rtfd docs and personally custom coded .html files and returned them to me, all the time looking for feedback and continuing to tweak at my request.

Extremely open to feedback and instantly responsive to questions. Every time I've come up with a 'yeah, but what if...' they have provided an explanation and a solution.

If I sold software I'd wanna sell this. Check 'em out.